Be sure to feed and pat one of our adorable Aussie icons, the eastern grey kangaroo!  These beauties love receiving pats, food and taking photos with all of our Australia Zoo visitors.  You can catch them every day roaming through our very own ‘Roo Heaven’.

Eastern grey kangaroos are an Australian marsupial.  This means they have a pouch and give birth to underdeveloped young!  A baby kangaroo is called a joey, and believe it or not, they are born blind and hairless, resembling a pink jelly bean and weighing in at only one gram.

The joey will grow and develop in the safety of mum’s pouch until approximately nine months of age.  They are not completely independent until 18 months old!  The eastern grey kangaroo is found over most of the eastern states of Australia, including Tasmania.  They have adapted to live at all altitudes, including open plains and woodlands, up to subalpine areas.

Did you know a group of kangaroos is called a mob?  Kangaroo mobs are most frequently spotted grazing on grass and shrubs during the early hours of the morning and late afternoon to avoid the hottest part of the day.  Kangaroos are part of the macropod family.  Their hind legs are larger than their forelimbs and they have an impressive muscular tail to assist with balance – almost like a fifth limb – Crikey, that’s cool! 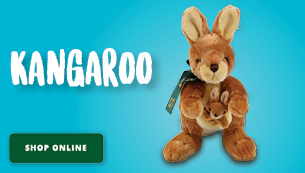