Introducing Australia Zoo’s mischievous mob of meerkats. These adorable African natives can be spotted all day long, foraging and exploring their home that overlooks our African Savannah. Be sure to keep your cameras rolling because what they lack in size, they make up for in personality!

Meerkats are in the mongoose family. They live in a mob, consisting of up to 50 members. Crikey! Meerkats put the ‘team’ in teamwork! They all work collectively to protect their mob from snakes, birds of prey and other meerkat mobs.

Using their sharp claws, they dig underground burrows, offering protection from predators and the harsh African heat. One or more members of the mob is always on sentry duty – standing on a high point like a stump or termite mound. They stand on their hind legs and utilise their keen vision to spot threats. To notify the mob of danger, the sentry will deliver a high pitched squeal, sending the mob scrambling for cover! Meerkats have a keen sense of smell which they use to forage for their favourite foods. On the menu are caterpillars, insects, scorpions, spiders, birds, reptiles and eggs.

Meerkats live a difficult life in the African desert, constantly threatened by hungry predators and drought. However, their population is still currently going strong and we love them.  Woo-hoo! 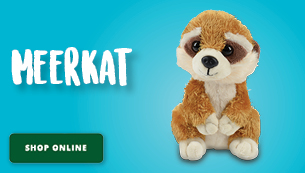