Introducing the largest monitor to call Australia home, the perentie! The prehistoric perentie can be found sun baking and exploring their home, right here at Australia Zoo. Make sure you add it to your Australia Zoo bucket list!

Perenties are found throughout the rocky hills and outcrops of South Australia, Western Australia, Queensland and the Northern Territory! These reptiles are perfectly adapted to their environment. Their earthy-brown, cream and tan colours make them the perfect camouflaged predator.

Perenties are carnivores! Just like snakes, using their forked tongue to smell, they will locate their meals which often include mammals, lizards, birds and eggs. They are a powerful predator known to readily tackle and eat some of Australia’s most venomous snakes. Crikey!

When feeling threatened, perenties will raise their bodies, fill their throats with air and exhale, which makes a loud hissing sound! If that fails to intimidate, then they will use their long powerful tail as a whip, as well as bite and scratch using their large teeth and claws. Strewth!

Monitors are among the world’s oldest lizard families and are thought to be highly intelligent. They are apex land predators and a force to be reckoned with! They are currently a species of least concern. You-beauty! 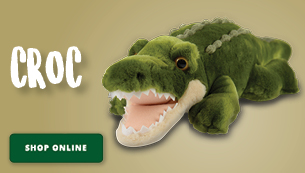