Australia Zoo’s two-tonne, ripper rhinos sure are a sight to see! Keep your eyes peeled on the African Savannah for these enormous animals. If you’re lucky, you might even catch a glimpse of them cooling off in their very own mud wallow. 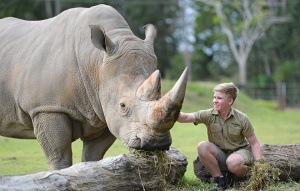 These giant African natives are found throughout tropical and subtropical grasslands, savannahs and shrub lands and they primarily feed on grasses. Adult bulls can weigh up to 2,300 kilograms. Strewth! Male bulls are predominantly a solitary animal and can be very territorial. The girls, however, can be spotted in a ‘crush’, which is a group of up to six female rhinos. 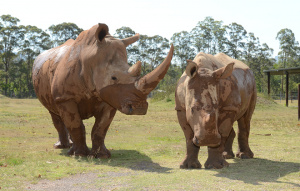 White rhinos communicate vocally, using a wide range of sounds including snarling, wailing and squeaking.  Non-verbal communication is also used, particularly during breeding courtship.  A male bull will join the female, keeping a safe distance for up to 20 days. The bull detects when the female is ready to mate through her scent glands. The coupling will then take place and can last anywhere between 20 minutes and one hour! The gestation period for a white rhino is approximately 16 months. Crikey! 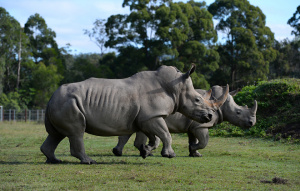 The southern white rhino has long been a victim of illegal poaching. Conservationists around the world are working to save these impressive animals as they are currently listed as a near threatened species. 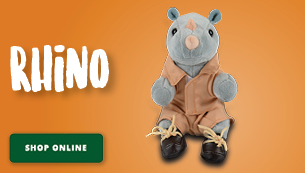